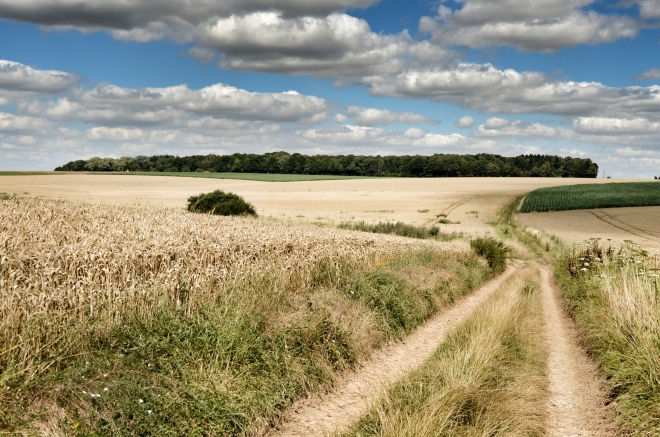 Today marks the centenary of the first attacks on High Wood, or Bois des Fourcaux to the French. The wood sits on a high point which commands a large area of ground where the Battle of the Somme was fought between July and September 1916. On this day in 1916 the wood was attacked by cavalry, a mixed force of British Dragoons and Indian Lancers. This attack, over open ground largely untouched by bombardments, took the Germans by surprise. One Indian Cavalry account recalled:

” As each squadron cleared the defile it formed line and advanced at a gallop in the direction taken by the advanced guard, which lay through a broad belt of standing corn, in which small parties of the enemy lay concealed. Individual Germans now commenced popping up on all sides, throwing up their arms and shouting ” Kamerad,” and not a few, evidently under the impression that no quarter would be given, flung their arms around the horses’ necks and begged for mercy — all of which impeded the advance. It was about this time that one of our aeroplanes came over, flying very low and firing tracer bullets to show the positions of hostile machine-guns and also that of a German trench which ran from High Wood to Delville Wood and which, owing to the corn, was invisible. When the advanced guard reached its objective, a German trench to the north of Delville Wood, occupied by infantry, could be seen clearly and German artillery (located by the flash of the guns) opened fire… During the whole period of the advance the regiment had been exposed to flanking machine-gun fire from Delville Wood.”

But the advance could not and was not exploited, and two months of fighting for the wood raged thereafter: costly infantry assaults, bombardments from everything from shrapnel to incendiary, gas attacks, flame throwers, mining, attacks from the air. In the end it fell to troops of the 47th (London) Division with the assistance of tanks on 15th September 1916.

By the end of the Battle of the Somme it was estimated that at least 8,000 British soldiers had perished in the fighting for High Wood; and it’s dominance on the ground even today, a century later, makes it both an impressive and foreboding place to visit.